Abergavenny is well served by castles – as well as its own Norman keep, there are Skenfrith, Grosmont, Whitecastle and Raglan Castles all within a few miles of each other. Situated on the Marches, this area was a key line of defense/attack for the Normans. The castles date from the end of the 11th century.

A well marked path known as the ‘three castles walk‘ links the three castles at Grosmont, Skenfrith and Whitecastle. 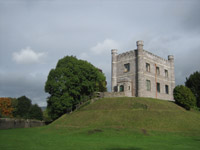 Abergavenny castle is one of the best examples of a motte and bailey castle in Britain. With a restored keep set on top of a man made mound, there are also enough walls remaining to show that this must have been an impressive castle when in full repair.

It has its dark tales to tell as well – in 1089 a Norman lord, William de Braose invited twenty Welsh chieftains to a Christmas meal in the castle. While they were feasting, they were executed.

The castle meadows, stretching out alongside the River Usk provide a picturesque scene at all times of the year, and the brick path makes for an idyllic walk at all times of year.

Cost: Free. The castle grounds and museum are free to enter. 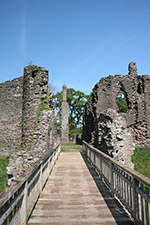 One of the three castles in the Marches, Grosmont is a good example of a Norman motte and bailey castle. Likely to have been built in the early 12th century, the exact date of is still a matter of debate. Much of the original walls are still standing, with one stone staircase leading up onto the battlements.
The ‘motte’ or moat is mostly dry now.

It’s hard to imagine a more picturesque location for a castle. Grosmont is a good contender for the most beautiful village in Wales. 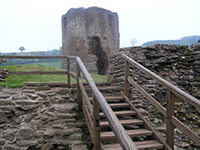 Skenfrith castle, situated in the small village of Skenfrith is small, but well formed – the round corner towers and high walls are still intact, and together with the central keep, you need very little imagination to picture the castle in its original state. As with the other three Marches castles, its early history is unknown. The main keep and walls date from the 13th century when Hubert Burgh was overseeing building work here.

Whitecastle is apparently so called because the walls were originally coated in a lime wash that made the castle white and visible for some distance. It is the most complete of these three castles, and the largest – the moat still contains water and access is via the drawbridge. There are some good views across the countryside from the top of the towers.

Cost: There is a small entrance fee for this castle.

Raglan castle is the biggest of all the castles mentioned so far, and in the best shape – you’ll want to spend a couple of hours wandering around the ruins. It’s a little more modern that the previous three castles – built in 1435 AD for Sir William ap Thomas.

Cost: There is a small entrance fee for this castle. 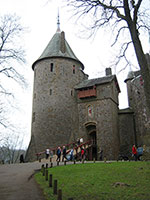 As close to a fairy castle as you can get outside of Disneyland, Castle Coch was built in the late 19th century on the remains of a 13th century castle. It can be found just outside Cardiff, and is signposted from the M4.